Just Herpes
Home Herpes Facts Herpes Facts Sheet: All You Need to Make Smart Choices About HSV
As an amazon associate, this site may earn from qualifying purchases.

It’s crucial to know the herpes facts and myths. Herpes is misunderstood and common, yet under-diagnosed. A massive 85% of those who have herpes don’t know. This leads to the silent spread of the virus, as do myths about safe sex. See herpes facts, myths, and statistics all on this page — plus tips for treating it. 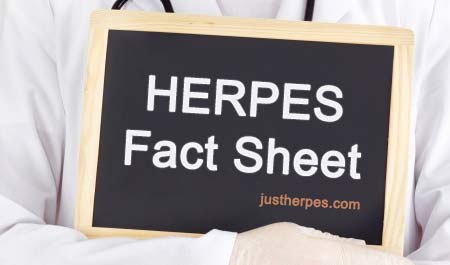 1. Herpes is not uncommon.

Herpes is actually not uncommon. This is surprising to many when you consider the stigma associated with the virus. The fact is that herpes is prevalent, yet under-diagnosed: About 85% of those who have it don’t know. Here are some statistics about herpes in the American population, from this page.

2. Herpes is only contagious some of the time.

Herpes spreads by skin-to-skin contact with an infected area that is contagious. However, the virus is only contagious either when there is an active outbreak, or during periods of viral shedding without symptoms.

Suppressive therapy makes it less likely an infected person will pass it to their partner. A study done by the creators of Valtrex, an antiviral medication for the management of herpes outbreaks and transmission rates, also showed that condom use reduces exposure to the herpes simplex virus. According to their study, these are the rates of transmission per year of regular sex:

It’s a myth that condoms protect you from herpes. The above study suggests that condoms reduce the herpes transmission rate by half. However, studies have shown this to not quite be the case:

Herpes outbreaks are known for blisters on the skin of the affected area. They usually look like clusters of fluid-filled sores that dry,crust, and flake off. Some people have outbreaks a lot, some have few with long dormant stages in between, and some have none at all.

Herpes outbreaks can be caused by aggravating factors in the diet or the environment.

Herpes is not curable, but is treatable. There are medications on the market that can stop outbreaks, reduce your symptoms, and drastically reduce contagiousness. HSV can also be managed with a healthy diet.

5. Chicken pox and shingles are caused by a herpes virus.

Herpes viruses don’t only include the sexually transmitted kind. Chicken pox and shingles are actually caused by a type of herpes virus.

6. Many people with herpes say it’s not a big deal.

The main effects of herpes are sometimes having outbreaks when the virus becomes active, and having to make adjustments in one’s sex life. For example, there is the need to disclose to partners that you have the virus. Generally, herpes isn’t dangerous or fatal. Here are some points about the effects of having herpes:

7. You can have a great love life with herpes.

Herpes is misunderstood and widespread. With education and awareness about herpes facts and myths, hopefully the stigma associated with the virus can be reduced, and people can be better prepared to make informed decisions.

Did you enjoy reading about these herpes facts? Pin an infographic on Pinterest:

Can you have kids if you have herpes?