Just Herpes
Home Herpes Dating & Relationships Dating How to Tell Someone You Have Herpes
As an amazon associate, this site may earn from qualifying purchases.

You don’t want a diagnosis to change your love life. Still, a huge part of coming to terms with herpes is its impact on your relationships. Maybe you’ve had it for some time and are dating again, or maybe you’ve just found out and need to break the news. Read on for useful tips to make it easier to tell someone you have herpes. 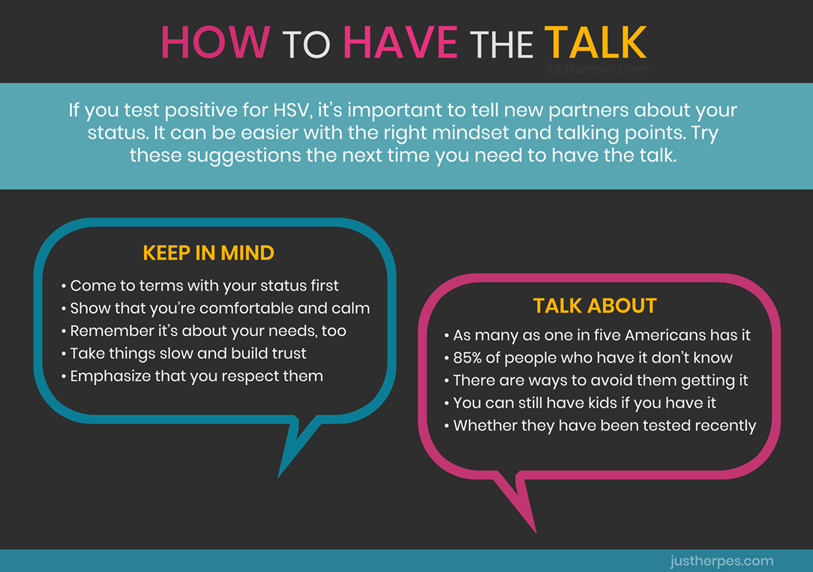 Although it can seem overwhelming to do, telling partners about a genital herpes diagnosis is necessary. Although the risk can be managed, the fact remains that there is always a risk of giving it to your partner. Although herpes seems blown out of proportion in the public eye compared to what it really is, partners should still be informed.

Those are just two research-backed talking points you can use in your discussion about a herpes diagnosis. Combine factual information like this with a calm mindset to make your talk go well, using the pointers below.

It can feel intimidating to tell someone you have herpes, so being nervous is normal. But it’s important to realize it’s not a disaster waiting to happen. A successful talk about herpes comes from:

If you’re newly diagnosed and haven’t come that far yet, don’t worry. You will. Maybe some of the tips here will even reassure you, too. (Some people who are newly diagnosed prefer to avoid the talk for now and use the Positive Singles community.)

When Is the Time Right to Tell?

Remember that dating is about what’s right for you, too. You’re allowed to use time spent dating to consider whether you’re interested in the other person.

Your health is personal, so you want to have an idea that the person is trustworthy. This is upholding your own boundaries and self-worth.

Taking things slow could actually be a valuable lesson gained from a herpes diagnosis. Dating is a discovery process, and you’re still seeing if there’s anything there. You might see some red flags, or find that there’s not enough of a spark after all.

It’s when it’s working out, and mutual, that you respect their boundaries and tell them. When you do tell, they should be understanding as long as you didn’t put them at any kind of risk.

Still, people’s opinions vary about exactly when to tell.

Some people use hard and fast rules. For example, some people who have herpes believe you should tell by the third date.

Just remember that above all it’s a compromise between your own comfort and boundaries and theirs.

Ultimately, it should be before you’re thinking about being exclusive, before you become intimate, and before the other person is emotionally invested. They should like you and be interested! But not in so deep that it would come as a shock.

Most obviously, it should be before clothes are coming off.

Be Comfortable with Yourself

If you’ve accepted and come to terms with your diagnosis, that makes it much easier to tell someone you have herpes or any STI. When you’re comfortable, that comes across. This attitude can be incredibly reassuring to your love interest.

If you aren’t comfortable with yourself, that will come across, too — your nerves or insecurity could make them nervous.

This is not to say to not show any feeling. It’s okay to admit that it’s embarrassing. You’re human, and this will help them understand and empathize with you.

Just go easy on yourself so others can too. After all, everyone comes with baggage, and a lot of them are still great catches.

How to Bring Up the Topic of an STI

So you’re calm, in neutral circumstances, and ready to break the news. Do open by letting them know that you respect them, have been enjoying your time together, and have something you want them to know, even if it might be a little awkward.

Don’t say you have “terrible news.” And you don’t have to use the blunt, “I have herpes”, either. (Although some people have certainly taken that route!)

Instead, you could say something like, “I test positive for antibodies for HSV-2, which is a type of herpes.”

A really great tack that might be easier and less awkward is opening the conversation by asking them if they have been tested or know their STD status. This takes the focus off of you, and onto the both of you as mature adults who care about their sexual health.

This could give you insight into whether they are conscientious with their own sexual health, or give them the nudge to get tested themselves.

Put the Diagnosis in Perspective

Couple it with the data they need to put it in perspective. Tell them the herpes statistics, what herpes is, and perhaps relate a little about how it affects you (or doesn’t affect you) personally.

For example: Are you one of the lucky ones who has never had an outbreak? Or do you now have symptoms only rarely, or even never, after managing or stopping your outbreaks? What if you only have outbreaks somewhere unusual, like your lower back (sacral herpes)? Even if you do have frequent outbreaks, do you take care to know the signs one is coming on and take care of your health in general? Then by all means, include this more flattering information!

Not Such a Huge Deal: Here’s a way to put it in perspective: You could mention that there are several types of herpes viruses: chicken pox, cold sores, genital herpes, and shingles. They might realize that it’s stigmatized yet not life-threatening or really even all that scary. Just about everyone gets chicken pox, and the majority contract oral herpes (cold sores) in their lifetime.

It Happens to the Best of Us: You don’t need to tell this new person anything about how you came to contract herpes, or defend your past to them. But if you think it helps to let them know some face-saving circumstance, use your discretion and gauge your trust in this person and the intimacy level. Sometimes mentioning that it’s possible to contract herpes even if you always use condoms is adequate.

Herpes Statistics: A lot of people don’t know how common herpes is, perhaps including your love interest. Let them know the statistics and that as many as 20-25% of Americans have it. You could add that 85% of people who have herpes don’t even know. Bonus points: You, on the other hand, were responsible enough and care about your health enough to know your status. And thus you know what precautions to take to protect them and yourself. And it goes without saying that by telling them, it shows you are also honest and ethical. Kudos.

Ease Their Concerns about Transmission

Let them know that it’s possible to have sex without their getting it. Educate them that in fact, there’s actually a very low rate of transmission if you avoid sex during outbreaks. That that low rate becomes 30% lower if you use condoms. And much lower if you use Valtrex as suppressive therapy and condoms. In fact, the chances are vanishingly small according to studies done by Valtrex about transmission rates under various conditions. At that point, it’s downright unlikely. 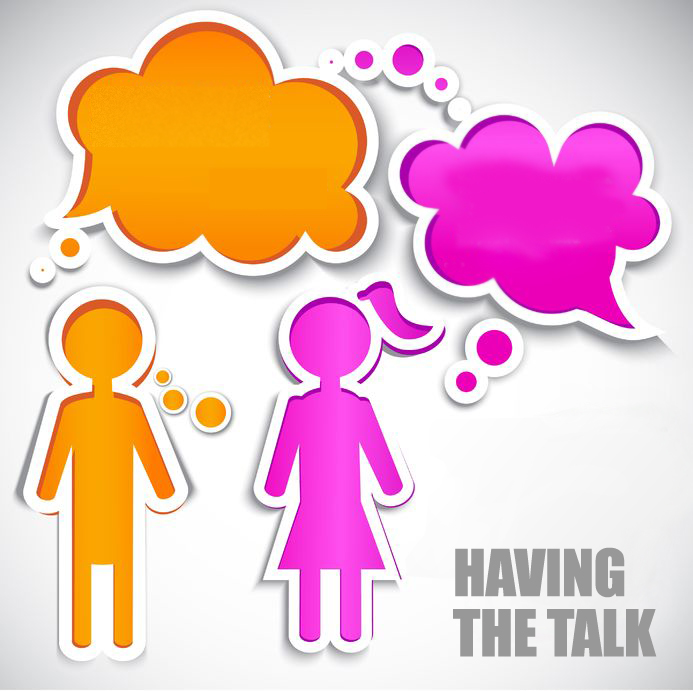 Most people will appreciate that you told them and respect you for it, even if they do ultimately decide they can’t accept it. Some will want to take some time to think about it, and that’s normal, so let them have that time. You will find those who don’t mind as long as you take precautions, and those who love you enough for marriage/commitment and won’t let an STD come between you at all, throwing caution to the wind.

Hey, they might even tell you they have it too.

A herpes diagnosis can actually help you separate the wheat from the chaff. Maybe they will say “okay,” maybe they will nay no, or maybe they’ll even be so eager that you’ll wonder if they are reckless decision makers. Dating with herpes is still as full of mismatches and red flags, or romance and serendipity, as it is without.

But really, saying they’re not willing to take that risk is the worst they can do. And that’s not personal. But remember, it’s not uncommon that they decide to take the plunge anyway. People do crazy things for love, and at the end of the day, many people consider herpes to be just a skin condition.

Some people decide to skip the embarrassment of having to tell someone about their herpes altogether, and opt for online dating for people with herpes. Read our review of Positive Singles here. This can be a great avenue, but don’t rule out the idea of meeting someone who doesn’t have it! Keep your head up, be comfortable when presenting your status, and see what happens! 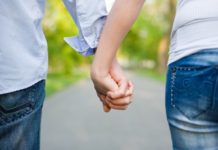 Herpes Transmission Rates – Why Your Partner Might Not Get It 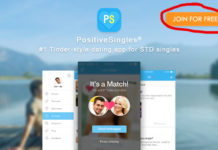 Best STD Dating Sites Review: Inside The Good, the Bad, and Between